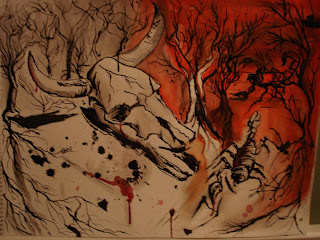 hey im Ian and im really not sure how this blog thing works yet. so basically i play varsity football im a nissequoge firefighter i play the drums and im very involved in church. anyway this is one of my summer assignments its my monster theme. this piece is pretty out of the box for me because i tend to do more realistic work. in this piece i used a ink dropper and bottle to make most of it and i later added some watercolor. 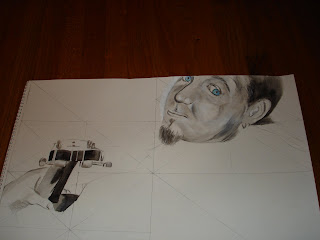 this is my portrait of some one else ist my youth leaders J and ist no where near finished and i need some suggestions on where i should go with it. later

this is an upclose. 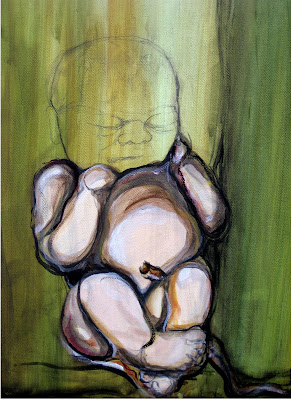 this is one of my summer assignments, its not finished but i wanted to post it so i can get some ideas, im supposed to do the drawing test for ap this year because i did design last year, but old habits die hard. im so temped to give the baby a light bulb as a head, but i cant...so help me please. i drew out the babies face but i dont know if i just want to paint it, im frustrated.

hi, my name is ashley rowland i am going to be a senior. i was in mr. needles ap class last year, it was a blast! im super excited to find out who the next steph woowwwke? is going to be...ha...im going to miss the kids from last year but i cant wait to meet all of you. Hm, well i like art and all my friends have gone to college so im down for meeting some new people. alright well, that about sums it up.
Posted by Smashley at 8:26 PM 2 comments:

Hey Artroom, It's great to see you all posting your introductions and getting to know you all. I'm currently in San Francisco working with Adobe which is fun. I'm looking forward to seeing more work from you all and getting to know you better. In addition to posting please leave comments for each other on the images that are put up. Remember to keep it positive and helpful!

I'm Katie and I'm really bad at introducing myself to be honest.. I play basketball I love art and I'm just a normal kid. Here's one of the assignments I have completed so far, the monster theme:

I set up a website just like this one towards the end of the year last year that has most of my work. Looking forward to senior year (except for the college applying part, that's a little scary) but at the same time I don't want summer to end.

Question for Mr. Needles... on the portrait of someone else do we have to use a live model?

Posted by Anonymous at 11:32 PM No comments: 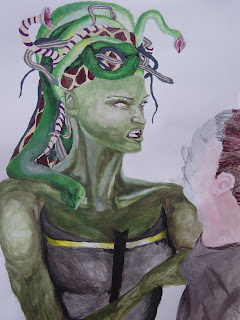 Hi everyone, I'm Erin...i'm not very thrilled about school starting, but i am definitely excited about this class. I always liked art pretty much but i really started to get into it during ninth grade i think. I'm mainly interested in drawing and painting people. Other than art i like dance and reading...i read whenever i can. I also like being outside and i've been camping for the majority of the summer. I hope everyone is enjoying their own summer so far.

The picture is my monster theme...i'm still not sure about the background
Posted by ETeeple at 1:23 PM No comments:

Wish I knew how blogs worked....Anway, been busy with work, but my real reason for not posting anything is because I'm lazy during my free time xP I'm Kim. Also known as many other names both IRL and online (the name Rewrite I tend to use more on the art communities online for example). I tend to stick to drawing creatures and things not in reality and I stay away from drawing things I find to be boring (such as people in real-life for instance). I like digital art and draw on Photoshop Elements quite often ever since OpenCanvas stopped working for me, but I do like traditional media such as markers and colored pencils. I too have a
deviantART account and go on just about everyday.
Here's what I have finished so far in my sketchbook this summer:

Based on a small sketch I did in English last year which was based on an anime called "Elfen Lied".

Based on a sketch done at this years AP History conference except less furry and prettier.

I had finished watching an anime called "Princess Tutu" and wanted to draw something based on it.

I felt I needed to practice drawing canines, but I really wanted to draw a scorpion, too...

Did this yesterday morning. Long story short, beach overnighter with youth group + leaving food out at night = raccoons attacking our food and us staying up to chase them. We said they were like ninjas x3

Drawn last night with very little light outside around a fire. Some of the people I was with during the overnighter got the new HP book and were reading it so I took the opportunity to sketch them out. My scanner killed the picture and I couldn't Photoshop it back to life like I usually can (looks A LOT before IRL).

I do have other things I'm working on though. For now, I go read HP7

I made a blog

Hey guys! I hope everyone's having a great summer! I made a blog, it's stephdesimone.blogspot.com because I couldn't think of anything more clever haha. Check it out!
Posted by Steph D at 9:54 AM No comments:

Labels: I made a blog 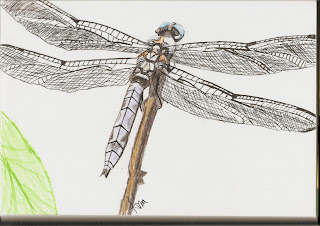 This little guy was done in colored pencils with some ink. Let it be known that colored pencils are my forte. XD (god this pic looks so much better IRL >>)
I also wanted to know if the dimensions of the Portrait size are set in stone - because I found a really great piece of wood I'd like to use for it, but it's only 12x20 rather than the 16x20. o.o; It was the biggest they had of it. T^T
Posted by Ama at 1:38 PM 2 comments:

My name is Lauren, but my friends call me Weissy. I guess you can too.
I'm big on stenciling. It's been kinda my thing for the past year or so. I like photography, I take pictures of everything.
I have a deviantART page, check it out, a lot of my work's on there.
Here's some of it: A stencil I did of Sublime, my favorite band.

Hello Group, I am Jen. 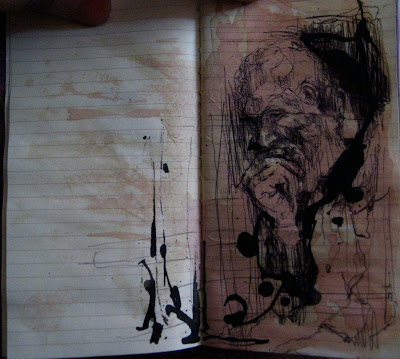 I was in needle's ap class the previous school year, and it was really rad. needles is really rad too.
i think it sucks a lot that there's only going to be one period of ap art next year. especially for a class that has two periods worth of work. and since there will be complete chaos in the classroom from everyone trying to get their work done by the end of class, no one will get to truly know one another.
i'm jen yu. art is my favorite subject in school. i have absolutely no talent outside of art, so without it, i'd be a complete failure at life instead of being just a normal leveled failure.
i don't like tomatoes, unless it is ketchup and i lose my cell phone almost every week.
Posted by Jen Yu at 5:55 AM No comments: 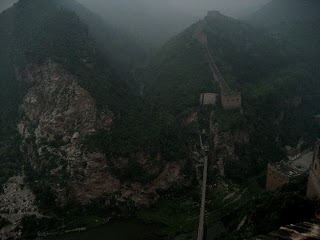 hey everyone! i hope you're all having a great summer!
this is the view from the great wall! isn't it a beaut!? ^__^
can't wait to see what the blog assignments will be, needles! 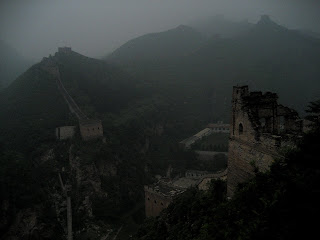 Hey Artroom! I hope you are all have a terrific summer. I was just up in Boston (and I'm heading to Ottawa) working with Adobe on a cool program for teachers (this pic is from the aquarium up there).

I'd like you all to check in before August and introduce yourselves to the group. I'd also like to see at least 1 piece from each of you by the beginning of August (choose any summer assignment to post). Have fun!
Posted by Needlesville, N.Y. at 2:53 PM 1 comment:

Hey, can I use a photograph for one of my summer assignments?-
Posted by Smashley at 12:31 PM 1 comment:

weeeedly weee! Hope you guys are having a good summer thus far. Anyone got anything new to post?
I doodled this for one of my portrait things for my own blog. Bahaha~
Posted by Anonymous at 11:06 PM 1 comment:

can we check the grades online
Posted by kevin at 9:27 PM 1 comment:

Hey guys, You don't have to post them but please email me when you know what your AP test grades- I don't get them until September. I hope you all did well- either way you all created some great work and learned a ton (that's what's really important).

You can email me at the school address: tneedles@smithtown.k12.ny.us
Posted by Needlesville, N.Y. at 8:30 PM No comments:

You can call (888)308-0013 to get your grades, it costs $8 but if you wait collegeboard said you can be waiting for your grade anywhere from mid july to september, so i recomend it. Im not posting my grade until i know other peoples...
Posted by Smashley at 12:12 PM 10 comments: