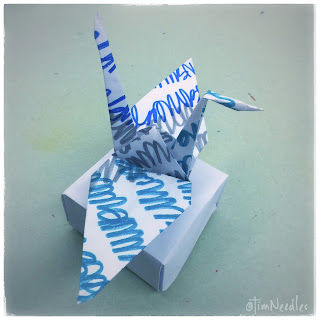 Now that we have all mastered the origami box we will move on to the Paper Origami Crane in Studio Art class today.  Above is the demo crane I created in class this morning and below is the step by step tutorial video showing how to create them.

The paper crane is an important symbol in Japan strengthened by the story of Sadako and the 1000 paper cranes from after World War II. In our continued relationship with japan we have created a 100 paper cranes each year in class and gifted them to Japan each year since my first visit in 2009.  I have even given Sadako's brother himself cranes that are housed at the Hiroshima war memorial in Japan as well as the school district of Fukushima where the terrible 2011 tsunami and nuclear meltdown occured and our cranes are housed in city hall.  Below is the story of Sadako is you are unfamiliar with it.