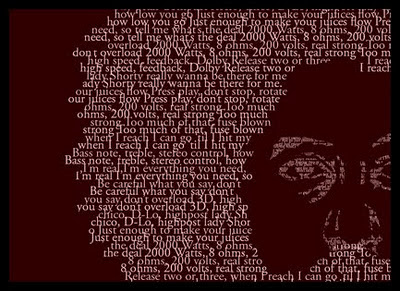 This week's assignment in computer art class is to create a portrait of a person who writes (authors, songwriters, screenwriters, comedians, ect.) using letters, words, or sentences. Above is a detail of an example that I created in class of musican, comedian Reggie Watts.

In class we explored Adobe's amazing Words At Play website by designer and illustrator Roberto de Vicq de Cumptich and designer Matteo Bologna. Above is a an image from the site of author Anne Sexton which uses letters to create to portrait as opposed to the one I created with words. There are a number of different ways to create a portait for this project and different programs that would work and as this is one of you last assignments I'll give the freedom to decide to you. Wether your using Photoshop, Illustrator, or InDesign make sure the final work is 8x10" and the resolution is 300.

Before you start take a look at this tutorial from Layers magazine on how it was created which can help you think about how you want to approach the project.<>
Posted by Needlesville, N.Y. at 10:06 AM