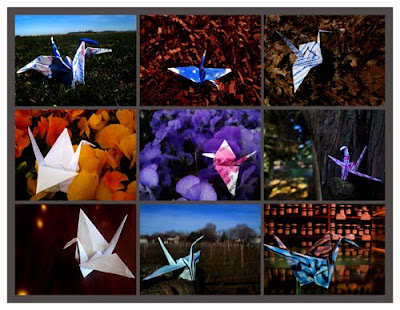 This week we are doing a project where we are going to create 1000 individual origami paper cranes (known as a Senbazuru, it’s a symbol of peace and good fortune- in Japanese lore if you make 1000 you are granted a wish) and we will photograph each one to make a large photo montage. I had the idea after looking at a photograph I took in Hiroshima of Sadako Sasaki's final crane- http://goo.gl/QOSsK when I had a chance to see her brother speak at her memorial site.

Each student will create and photograph their own crane and we will combine each of them into one larger piece which we would like to share with a school in Japan. Prints will be sold to raise funds for the Japan Society's relief fund and the montage will be delivered to a school near where the disaster occurred as a symbol of hope and support.
Posted by Needlesville, N.Y. at 8:25 AM No comments: