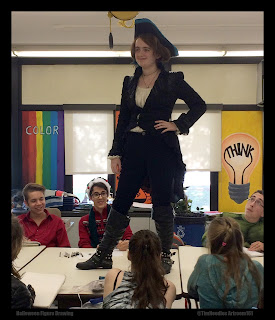 In Studio Art and AP Studio Art classes we will celebrate Halloween with figure drawing in costume today.  We will begin with 5 minute Figure Drawing poses from student models then develop into drawing multiple models together and different length poses with different materials.  This will give students a taste of our upcoming figure drawing unit! 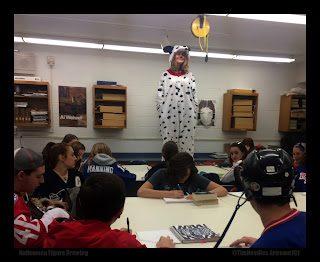 
"Everyday is another opportunity to be creative"- https://vine.co/v/eJriwMVdZwK

Yesterday Twitter announced that it was ending the Vine app, a tool which we've been using to document and share some of the great creative work and adventures in and out of class over the years.  As an artist I always enjoyed the creative constraint of 6 seconds of video so it was a regular part of my work as we'll as my teaching. The @timneedles Twitter page will go on and evolve but Vine is what helped make it great. Here's 10 of my most popular Vines.  Here's a few of the favorite Vine video's that we've created together over the years that helped contribute to over 1.3 million loops!

It's unfortunate that Twitter wasn't able to find a way to make Vine more successful- thanks to all the people who shared the Vines and left positive comments and to all the friends we made through Vine like Rebecca Mir, Anne Robertson, Tzaddi, Zach Page, Rust, Guy Vincent, and the K12artchat crew! 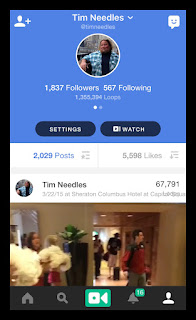 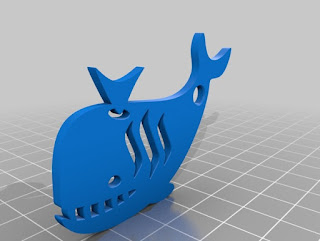 In Digital Media class this week we are begining to learn about designing for 3D printing but creating a keychain.  First log into Tinkercad and click the Learn tab to complete the first 4 basic tutorials.  Once your done you should create a #D design for a keychain that is no larger than 35mm.  The examples here give you a sense of the diversity of what you can create. 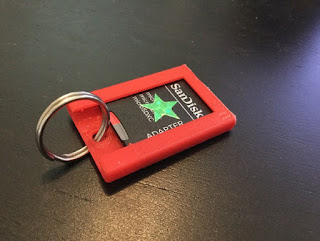 Extra Credit: How Does Art Unite Us?

How Does Art Unite Us?


Winners will be directly notified by January 6, 2017. Winners will also be announced on our Facebook and Twitter pages.

Judging: Winners will be selected by SchoolArts’s Editor, Nancy Walkup. Posters will be judged based on overall impact, effectiveness in conveying the theme, originality, and artistic merit.

Labels: Extra Credit: How Does Art Unite Us? 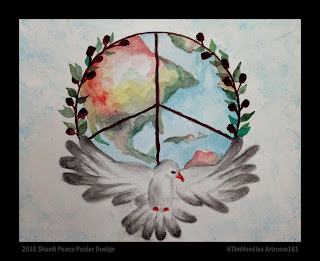 Congratulations to AP art's Ilysa Sirota on winning the 2016 Shanti peace poster contest for her colorful design featured above.  She will awarded $147 (the age Ghandi would be if he were alive) by the Shanti organization and Suffolk County executive Steve Bellone at a ceremony later today and her image will be featured in their annual calendar.  This is Ilysa's second winning poster design, she also took the top prize in last year's competition.  For over 12 years, Volunteers of Shanti Fund have been actively promoting peace through education through programs like their annual peace poster competition. 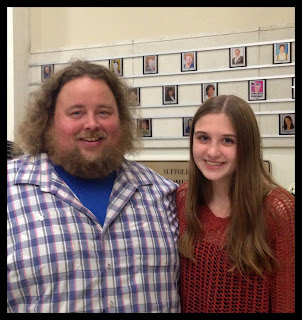 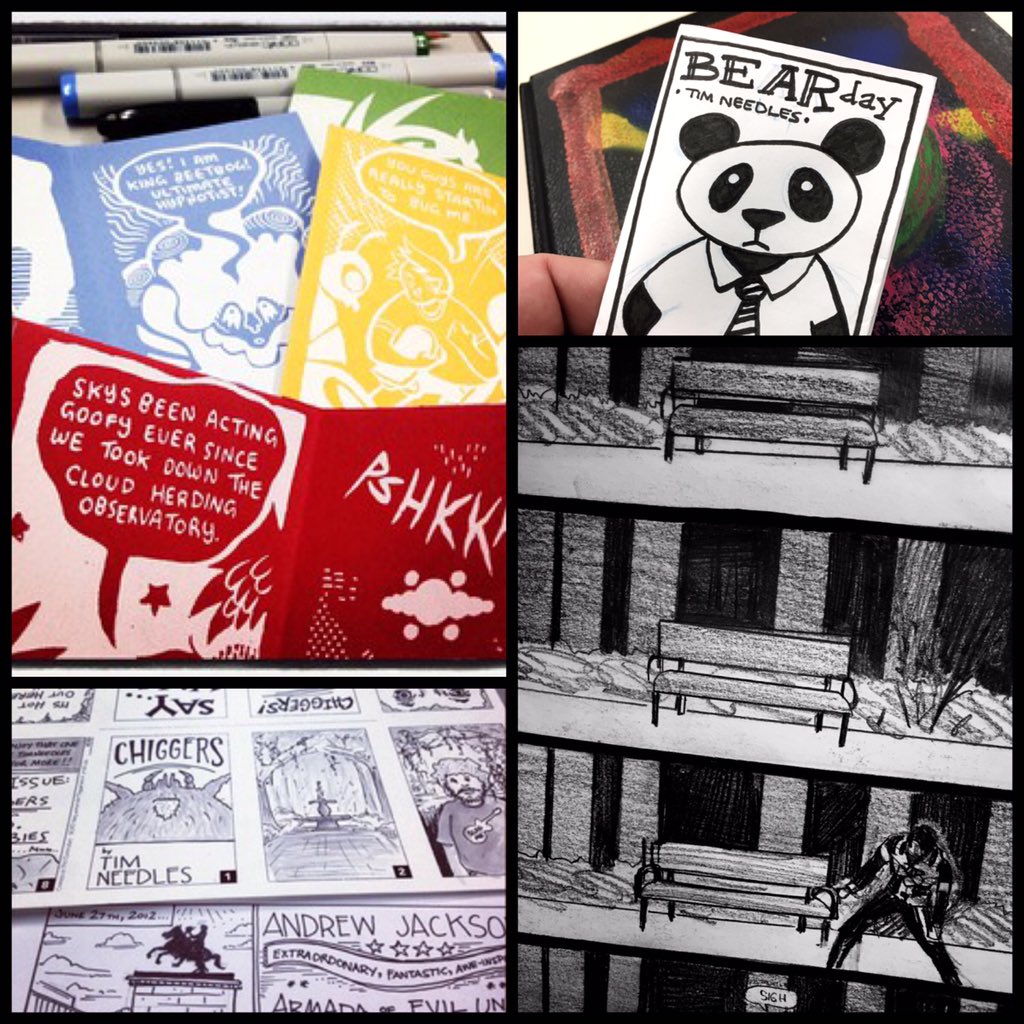 This week we are drawing and designing Mini-Comics in Studio Art class.  We will learn about the basic elements of a story, the folding techniques, and the variations in the media.  Then we will brainstorm ideas and begin drawing and designing our own.  You can base you comic on the character you created in our warm-up cartooning activities or start create new characters but the final comic should include 8 pages including a cover with your name and a title and a back with Smithtown High School East, the year, and Mr. Needles written. 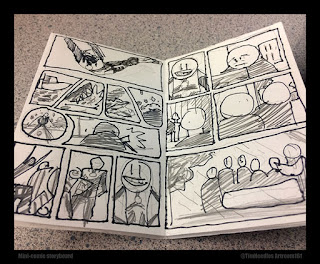 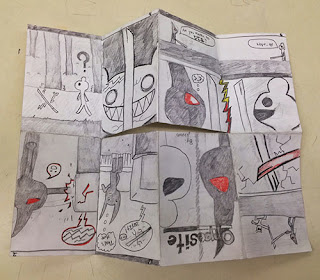 After you comic is shaded, toned, and/or colored you should open it back up to one piece of paper and scan it.  We will be scanning these comics after they are completed to show and trade them.  Below are a few finished student comics from previous classes. 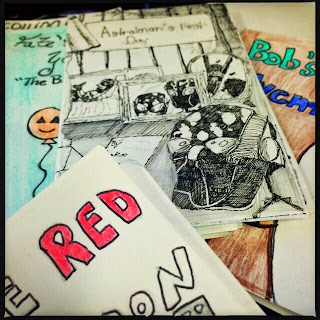 A number of former students have become comic book artists and work in the film industry creating films based on comics.  Check out the example below from East grad Nicole Rodriguez! 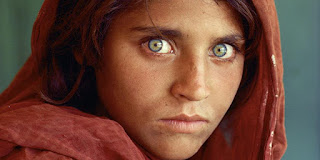 In Photography we are going to be working on our Artist Research Project this week. I introduced you to the work of photographers in class:

Today the Art Honor Society will meet to prepare for and run a Safe Halloween- Spooky Hallways event in partnership with our new Makerspace club.  We will be encouraging kids do color a pumpkin that then can become virtual thanks to the augmented reality app Quiver.  We tested it out in our last Makerspace club meeting and you can see the results above!

Below are a few picture from the Spooky Hallways event, thanks to everyone who volunteered their time! 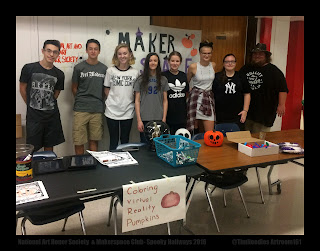 In Studio Art we are learning different methods to create watercolor portraits from life.  Each student should create 5 portraits of classmates using the different approach listed below.  The demonstrations I made in class are shown above and show the basics of what we are learning such as: learning to mix colors and create realistic skin tones, build proportionate images, and master the brushwork to create a lifelike portrait.  I created the demos with different style because the style is open as long as the portrait is accurate in shapes and colors and hopefully it has a likeness.  Here are the 5 approaches that are due on Monday:


We are beginning to learn the Basic Elements and Principals of photography in class and we are going to take some tips from National Geography photographer Steve McCurry who's images are featured in the video above. This week you will be asked to take images that reflect his 9 tips which are listed below then edit those images using Adobe Photoshop. The finished images are due on Monday October 24 and we will critique the photos together as a class.


Steve McCurry's work is pretty amazing so we'll take a look at his process in class and hear him talk a little bit about his work and the stories behind them.  Here's an extra glimpse of McCurry discussing his work.

Today a representative from the Hartford Art School will be visiting the AP Studio Art class to discuss their program and review portfolios.  We've had a number of students attend Hartford over the years such as Steve Ponzo, Aidi Wang, Jess Brett, and most recently Dylan Ahern and they've all had positive experiences. 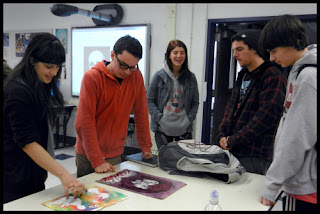 
We will begin our artist research project this week-each student has been assigned two artists that reflect their work in some way.  Create a presentation with:
Below is the master list of artists.  We will share the presentations next week and have a short visual and written assessment after we have reviewed them all.

Today is also the last to enter the Young Arts contest which closes on Oct 14, 2016 at 11:59pm.  Enter for a chance for scholarships and a chance to be nominated for the U.S. Presidential Scholar in the Arts.  We will also have the Hartford Art School visit next week on Monday to discuss their program and review portfolios.
Posted by Needlesville, N.Y. at 12:00 AM No comments: 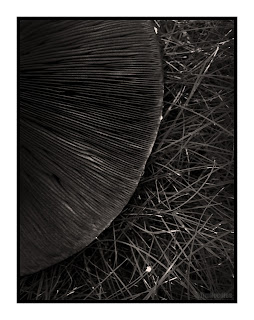 Last week in Photography we learned some basics about composition and went outdoors to incorperate them while photographing nature around the school.  The above image is the example I created and edited as a demo in class.  This week we will be in the computer lab editing our photos and each student should have an image for each principal and technique we learned:

This week in Digital Media class we are creating our own creative flextangles using Photoshop and the template online which is also available in the Assignments drive on your computer.  Each student should use original images or drawings to create a creative flextangle in Photoshop one layer at a time.  When you are finished be sure to use the text tool and add your name in as well the we will print them out and assemble them in class later in the week.


The demonstration I made in class using photographs of street art that I took at 5 Pointz in Queens can be seen above, think of a fun and interesting way that you can design a flextangle that reflects your interests! 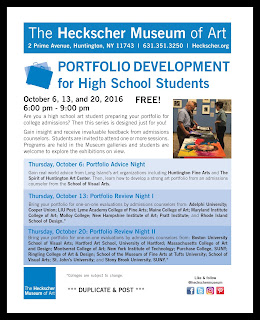 Students in the AP Art program might be interested in some of the offerings the local Heckscher Museum has coming up as part of their Portfolio Development Program.  The informational flyer is above and you can follow this link: Heckscher Museum HS student programs for more information and specifics.  In recent years a number of students have attended their college portfolio nights and found them really useful!
Posted by Needlesville, N.Y. at 8:08 AM No comments: 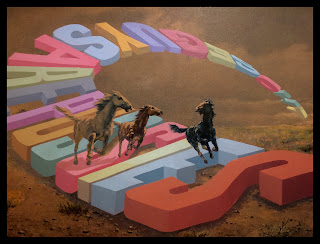 Wayne White is known for his playful and colorful word paintings and imaginative sculptures that transform his fun drawings into 3 dimensions so his latest exhibit entitled "I'M HAVING A DIALOGUE WITH THE UNIVERSE AND YOU'RE JUST SITTING THERE" at Joshua Liner Gallery in NYC was well worth visiting.  I wanted to share a few of my favorite works as we have been studying White's work for the last few years and it consistently delivers with a unique, interesting sense of humor. 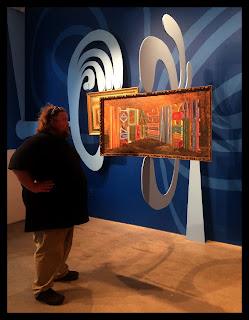 White's latest show was creatively exhibited with large cartoonist hands holding and displaying many of the paintings along with a really cool kinetic word sculpture resembling an old school weathervane.


The show was great but it felt a bit like an addendum to last years exhibit that was a bit more impressive with it's large scale sculpture and backroom installation. 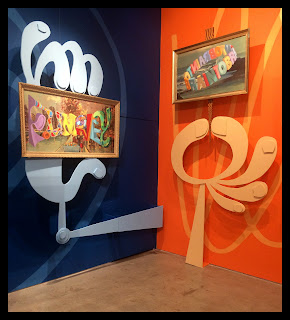 This weekend was the World Makerfaire so I wanted to share a few of the highlights as they relate to Digital Media class.  My favorite technology was the 3D Virtual Drawing using the Vive and Gravity Sketch as you can see above and you can view the 3D drawing here: Sketchfab

Another highlight was the scale and detail of 3D printing with new tech ranging from printing from your smartphone to lifesize 3D prints using both a massive 3D printer and a collaborative of blocks that are crowd sourced like the 3D print of George Washington's bust below from We The Builders. 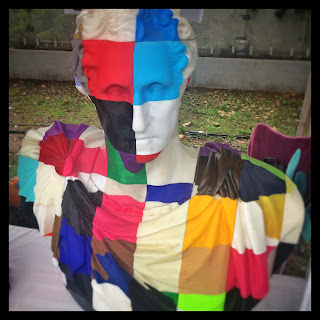 There was also example of 3D printed fabrics, jewelry, and garments that was really impressive and have enormous potential in the future. 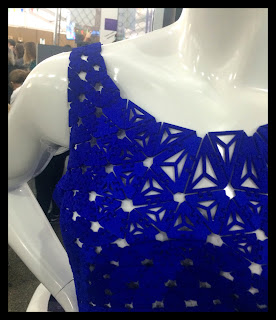 There was also an amazing table that included magnetic beads drawing repeatedly in sand under the glass from Sisyphus below. 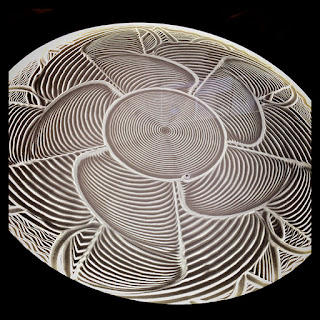 It was a fun weekend of exploring and there are a number of ideas I have after seeing the new technologies at Makerfaire that we might try to use in class this year!