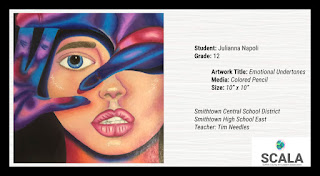 Congrats to Juliana Napoli, Nethmi Withanage, and Angelina Bhola who participated in this year's SCALA All County Art Show. The artwork looks amazing and represents our Smithtown East creative community well! The full show can be found on the link above. 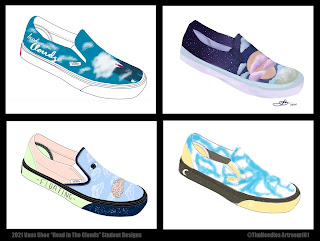 In Studio Art and Digital Media Classes we recently completed our 2021 Vans Shoe Student Designs for the theme Head In The Clouds and there were some really terrific, creative results. The four shoe designs above represent a student from each class who took on the challenge including Isabella, Angelina, Victoria, and Dylan (clockwise from the top left). I was excited to see all the brilliant designs so well done! 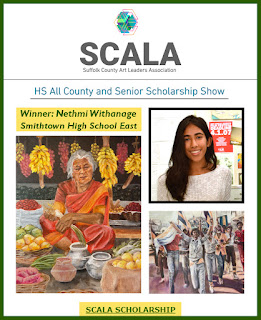 In today's meeting of the National Art Honor Society we'll celebrate out vice-president Nethmi who won the 2021 SCALA Senior Scholarship and will receive her award today at an online All-County ceremony. One one senior per school may enter and the awards are First place $750, second place $500.00, third place $250.00.

This week OKgo will be releasing a new collaborative video each day and some of them feature the work of students. Today's video will be livestreamed on Twitch at 4pm and OKgo Sandbox has shared that there will be some fun surprises along the way as a new video is released each day. Any student who took part in this extra credit project and sent in there work will be able to see the frame you created in one of the videos! I created one as well so I'll be watching alongside you excited to see the final results!

Come sing along & celebrate with us at the @RollingStone Twitch premiere of our second #ArtTogetherNow video tomorrow🎉 When should you join the party? The livestream begins at 4:00pm Eastern Time! https://t.co/DGcL71mHpv

April is National Poetry Month so to close out the celebration this week I'll be sharing out some of the video poems we created in class. Here's one of my video poem's I made this spring after hitting a year of the pandemic called Still Waiting.
Posted by Needlesville, N.Y. at 8:03 AM No comments:


This morning the NASA's SpaceX Crew-2 Lifted Off on it's way to the International Space Station. The crew of Dragon includes: NASA astronauts Shane Kimbrough and Megan McArthur, along with JAXA (Japan Aerospace Exploration Agency) astronaut Akihiko Hoshide, and ESA (European Space Agency) astronaut Thomas Pesquet and they are scheduled to dock to the space station at about 5:10 a.m. tomorrow, April 24. 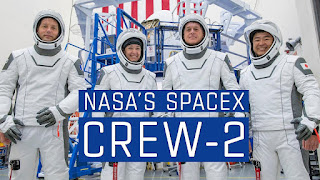 
This week we watched Age of Sail by director John Kahrs (who also directed Paperman) and looked into how it was created and intended to be viewed in VR then issued in 2D for the Oscars. We'll be working with VR later this month in class and experiment with our own VR filming.
Posted by Needlesville, N.Y. at 12:00 AM No comments: 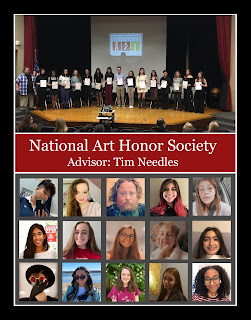 Today in National Art Honor Society we will finalize our 2021 Yearbook page (pictured above) and continue work on our Storm Drain Murals and our SADD mural collaboration as well as planning the end of the year ceremonies. 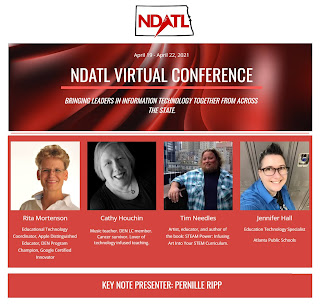 Today I'll be presenting virtually at the NDATL Virtual Conference in North Dakota and I'll be sharing some of the amazing work we've created this year in out virtual and hybrid learning. It's been a challenging year on many fronts but I've been impressed with the terrific work students have created and I'm always excited to share it with other educators!
Posted by Needlesville, N.Y. at 12:00 AM No comments:

The First Flight of the Mars Ingenuity Helicopter

The Mars Ingenuity Helicopter took it's first flight early this morning at 3:30am and made flight history as the first powered flight on another planet. Here are some of the early results and we'll take a look at the footage from the Mars Rover when it is received later this week. It is a very historic moment in flight history and may likely opens the doors to many new possibilities in exploring space in the future.

Congratulations to @NASA on the first powered flight on another planet earlier today with the #MarsHelicopter! https://t.co/wbDOyJgPcX

Here's a ew of my favorite Infographics students created last moth to share information about the achievement, I'll be sharing them out on social media today.

We had shared some terrific infographics after we completed the assignment in March for National Robotics Week that you can see on my twitter feed below.

Happy #NationalRoboticsWeek! The @NASA Mars #Ingenuity helicopter was deployed from the @NASAPersevere rover & will take it first flight as soon as next week so my art students used tools like @AdobeSpark to create #Infographics sharing facts they learned about this achievement! pic.twitter.com/kX33XMtcav

Labels: infographics, The First Flight of the Mars Ingenuity Helicopter

Today is the last day of Quarter 3 so make sure any missing or incomplete work is submitted today!

Google Doodle: 151st Anniversary of the Metropolitan Museum of Art

This week is the 151st Anniversary of the Metropolitan Museum of Art and Google marked the occasion with a special Google Doodle showing a GIF with some of the artworks in the museum and where they are located.

The Metropolitan Museum of Art was founded in 1870 by a group of American citizens—businessmen and financiers as well as leading artists and thinkers of the day—who wanted to create a museum to bring art and art education to the American people. On this day in 1870, the museum was officially incorporated and soon after acquired its first work of art: a Roman sarcophagus.

The Met has come quite a long way from that first showing to become New York’s largest art museum, with a permanent collection of over 1.5 million objects, spanning over 5,000 years from nearly every corner of the globe. A sampling of the many works of art found at The Met today are depicted in today’s Doodle artwork—including a Byzantine floor mosaic from 500-550 A.D., the armor of German Emperor Ferdinand I from the 16th century, an intricate traditional Lakota/Teton Sioux beaded dress, and the painting "Self-Portrait" by Samuel Joseph Brown, Jr. from the 1940s.

Whether you're a Met regular or planning your first trip to the Museum, be sure to visit a certain blue ceramic hippopotamus from Egypt’s Middle Kingdom nicknamed “William.” An unofficial mascot of The Met, he might soon become your favorite part of the collection.

Happy anniversary to The Met–and here’s to many more!

East senior Nethmi Withanage’s science research project on the behavioral science of color in pandemic art puts the “A” in STEAM as she advances to the Regeneron International Science Fair! Congratulations! @SmithtownCSD pic.twitter.com/WGIzJKRVyt

Congratulations to National Art Honor Society Vice President Nethmi Withanage for placing 1st on all of Long Island in the category of behavioral science and who is advancing to the Regeneron International Science Fair with her research on "The Analysis of the Use of Color in Pandemic Artwork Using Digital Quantifications."

Students from high schools across Long Island competed virtually at the Long Island Science and Engineering Fair and only 20 advance to the International Fair which is also being held virtually this year. 1800 students from around the world will be competing for over 5 million in scholarships and awards.  Please congratulate Nethmi and wish her luck as we prepare for ISEF!

In Studio Art we will work on a Creative Sport Card Design project this week which will be the first grade for the 4th quarter. We will view examples from Topps 70, a series of baseball cards designed by a number of diverse creative artists and designers from contemporary artists like Futura and Pose (both can be seen below) as well as Alex Pardee and Ron English to musicians like Action Bronson and Snoop Dogg to Celebrate the 70th anniversary of Topps sports cards. 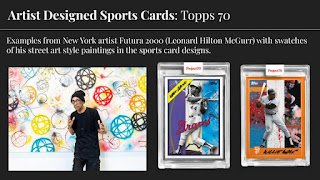 We will digitally design sports cards based on any player (local or professional) from any sport or Topps set that incorporate a similar creative, original style. Our first step will be drawing out 3 small, color thumbnails to figure out the design then use a variety of traditional and digital tools to create a creative sports card. 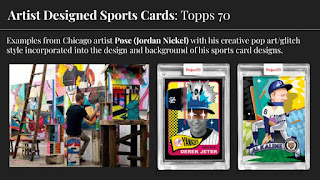 The #YurisNight preview of the @okgo All Together Now animated music video was AMAZING! So excited my students & I could collaborate w/ @OKGoSandbox be part of it! Congrats to the band & thanks to @amptMN & @PlayLearnLab for the hard work- is it really going to space?!! pic.twitter.com/ftg9GrWUN4

This weekend was Yuri's Night celebrating the anniversary of the first man in space in 1961 and OKgo received the Spirit of Yuri's Night award and shared a preview of the All Together Now Music Video project we worked on in collaboration with OKgo Sandbox which was pretty amazing. Even cooler is all the images from this first section of the video will soon be sent to space before they are returned to the creators! Take a look at the video below at 4:07:10 to see the talk and preview just after the Upside Down and Inside Out video.

Students who created animated for the OKgo All Together Now Music Video Collaboration should also share them with me in order to get their extra credit before the end of the quarter this Friday. Here's an example from Liz in film class who's frame was featured in the preview. 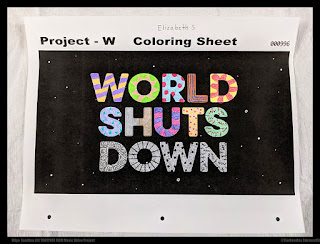 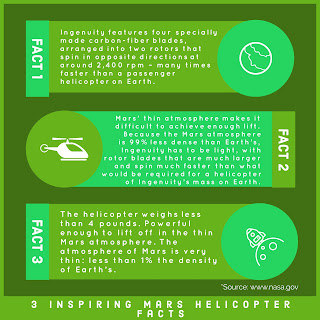 The Mars Ingenuity helicopter will take it first flight next week so we are working on creating infographics including 3-5 facts about the first powered, controlled flight on another planet this week. Here's a great example of an infographic from Riley in Studio Art using Adobe Spark and below is another terrify example by Angelina in Digital Media using Firealpaca. 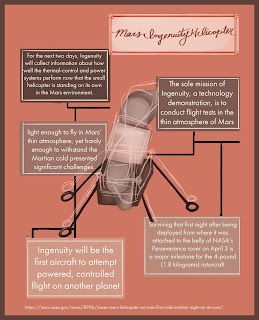 Here's some interesting facts about the Mars Ingenuity helicopter from a few months ago that also clarifies it's role as a tech demo.
Posted by Needlesville, N.Y. at 12:00 AM No comments: 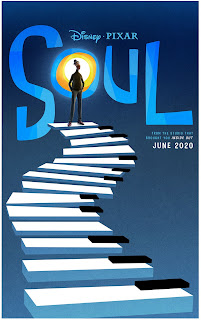 Today in our Media Art Honor Society/Film Club we'll have our first film screening with the 2020 Disney film Soul. We'll begin watching the film then next meeting complete it and discuss it and look into some of the background of how it was created and developed.

Lead singer and guitarist of band OK Go, Damian Kulash, will be joining us and introduce the world to a new video project that @OKGoSandbox has been working on. OK Go will also receive the Spirit of Yuri's Night on April 10th, 2021. #YN20th pic.twitter.com/AXL8g24Res

This weekend the OKgo music video we contributed to through OKgo Sandbox will premiere on Yuri's Night! Below is a version of the frame I worked on in class, it's exciting to collaborate with such a wide group of creative people on a project around the world. I'll be colleting some of the images of frames that students created to shout them out on Friday and Saturday leading up to the event!

So excited for my students & I to be part of @okgo’s animated #musicvideo project with @OKGoSandbox & the great @PlayLearnLab- I can’t wait to see the final #animation in April! pic.twitter.com/yILxp39HfC 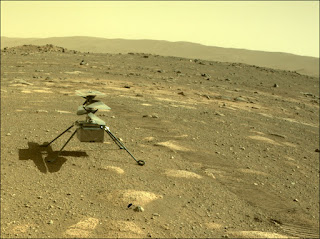 This week the Mars Ingenuity Helicopter is set to take it's first flight which will be the first powered, controlled flight on another planet. To celebrate and share our knowledge we'll research the helicopter and it's mission and create an Infographic to share 3-5 facts on social media this week. 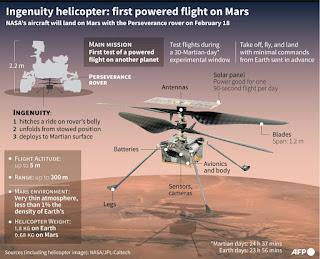