All AP Art students should have received the course bulletin and should have submitted payment to Mr. Aleci's office.  Checks should be made out to Smithtown Central School District for $94.
Posted by Needlesville, N.Y. at 12:26 PM No comments: 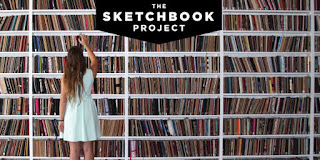 Today in National Art Honor Society we will be working on creating piece for our 2019 Sketchbook Project which is based on illustrations of some of our favorite songs.  I just visited the sketchbooks at the Brooklyn art Gallery to drop off my Tiny Sketchbook Project and for an opening of the Encyclopedia Project where one of my paintings was on display, always fun! 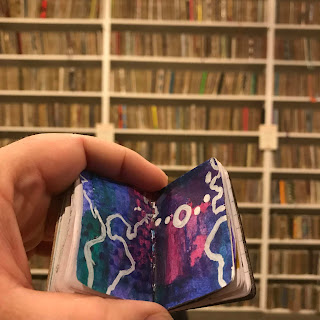 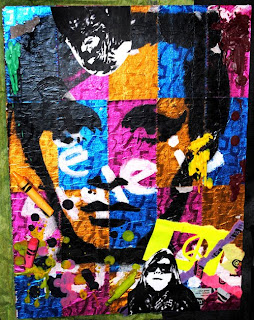 We are going to revision self-portraits but this time we are going to work to incorporate design elements to create a composition using pattern, texture, and shape.  In this work you should explore creating contrast with patterns and you should work with both realism and some element of abstraction.  The example above is from a student and the one below is one of my own.  You can create interesting patterns out of anything: line, type, shapes, ect. 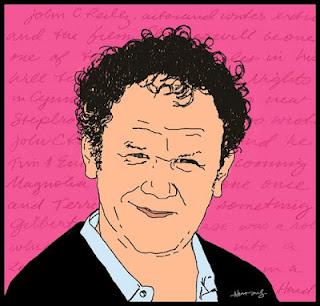 The master of this mix of realism and textured patterns is artist Gustav Klimt was an Austrian symbolist painter and well known for famous paintings such as The Kiss and the Portrait of Adele Bloch-Bauer I. 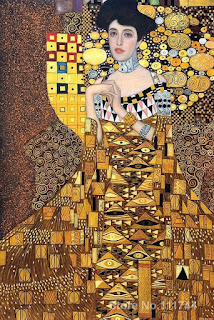 The portrait painting, one in a small series one of which was recently owned by Oprah, is now on view in NYC's Neue Gallery for free.  It is now often better known as the "Woman in Gold" after the recent film starring Helen Mirren and Ryan Reynolds based on it's history, the trailer is below. 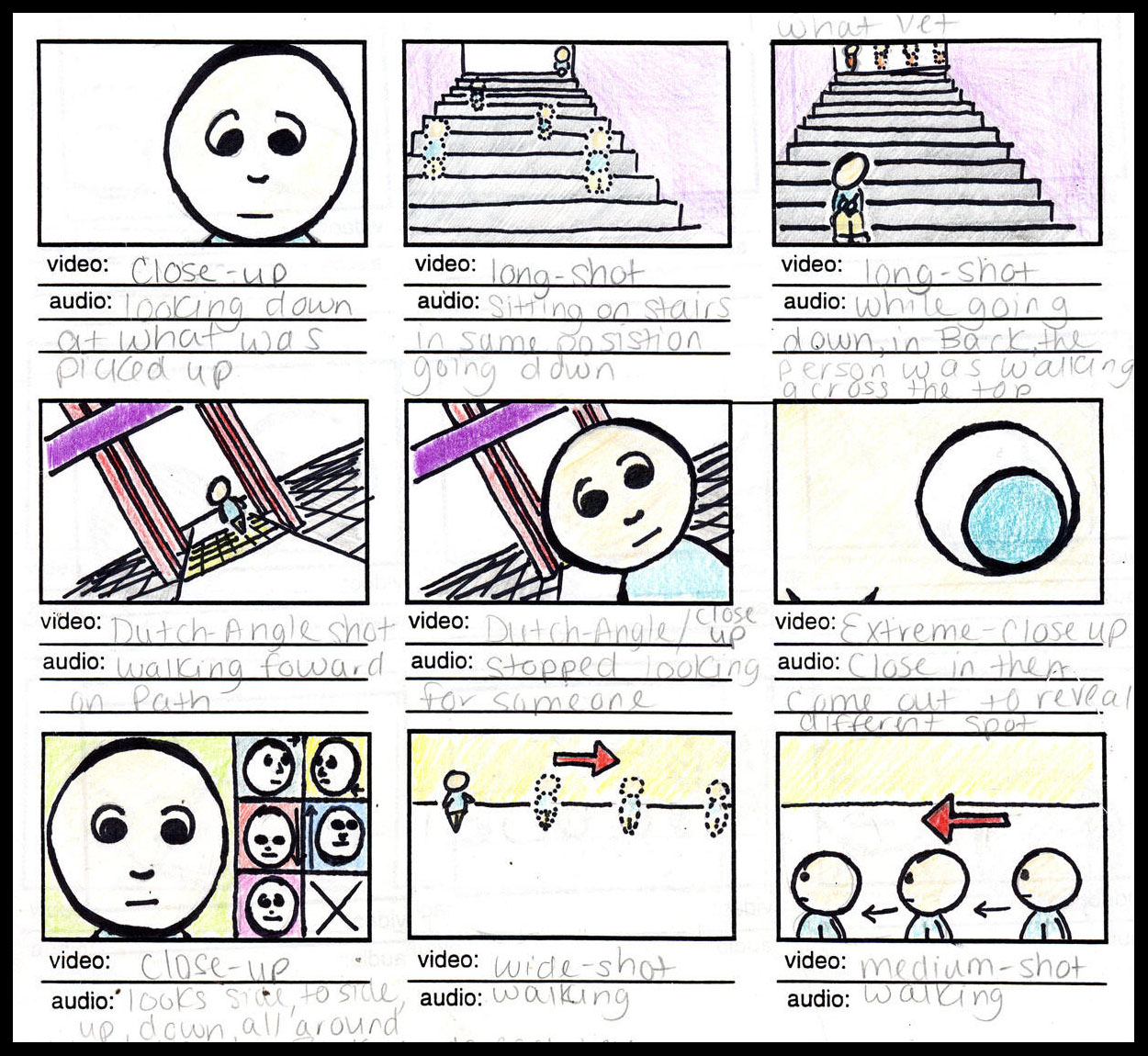 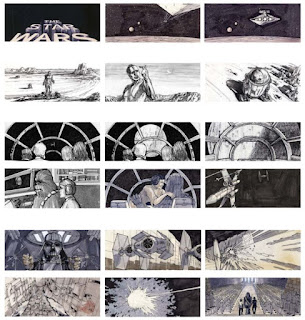 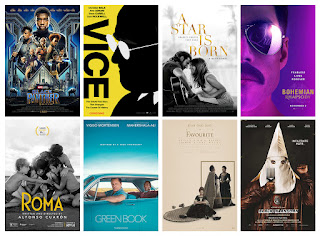 In Studio Art we are continuing our design unit with an original Film Poster Design for one of the Best Picture Oscar Nominees.  Choose any of the films nominated for Best Picture that we saw the previews of on Monday and create a new original design.  Below are a list of the films again:

Welcome back from winter vacation!


Welcome back from winter vacation! In digital media we'll discuss some of the Oscar winners from last nights ceremony as they relate to our ongoing film and animation projects in digital media and computer art classes.

Labels: Welcome back from winter vacation!

Today is the last day before our winter vacation so make sure all assignments are up to date and submitted! Have a terrific vacation!
Posted by Needlesville, N.Y. at 9:42 AM No comments: 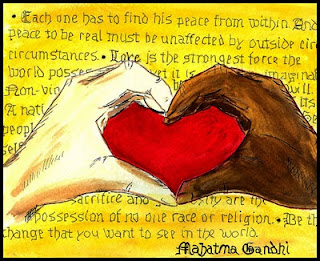 Happy Valentines Day to all members of the Art Honor Society! Today we'll have a one hour meeting and work on the Sketchbook Project, the Vans Custom Culture Contest, and the Japan Society student exchange! 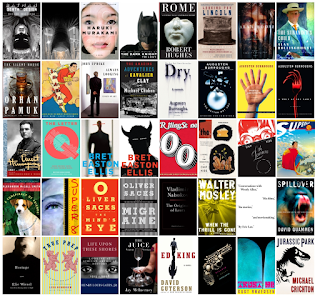 In Studio Art we will learn about 2 important contemporary designers: Chip Kidd and David Carson. Then we will create designs using the information we learned about the process with a book jacket. We will each re-design a jacket for our favorite book using the design principals we learned and the advice each of the designers gave on respecting the audience's intellect and legibility's interaction with communication.

The Harry Potter dust jacket book cover above by Kathie Bayne is a good example of what basics should be included and what a finished design looks like.  You can choose any book you like to redesign as long as it's in the school library.  Below is an additional TED talk by Chip Kidd in which he discusses designing books for authors like Charles Schultz, David Sedaris, and David Rakoff.

In digital media class we are learning the basics of animation and focusing on Frank & Ollie's Twelve Basic Principles of Animation.  We watched the video above showing how of the the rule of animation applies and what happens when you don't follow the rules.  We will now incorporate the learning into our animation challenges.  The squash & stretch challenge can be done digitally on Piskel and it's due Friday along with your alphabet animation morph.

In Computer Art class we started learning about 3D design and printing be doing a Art Disk Remix based on a design created by Morphi. Above are some of the initial 3D prints of student designs. Today we will learn some of the terminology using our class Quizlet.  We will continue reviewing them today and play Quizlet Live together as a class to prepare for the quiz on Wednesday.
Posted by Needlesville, N.Y. at 8:04 AM No comments: 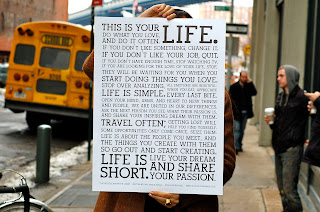 We learned about the basics of typography and design in class and now it's time to bring a creative approach to what we learned and pair them together as we learn a bit about Japanese culture.  The image above of the Holstee Manifesto is a great example of great type design and the image below is an example of what we are doing, creating an original illustrated haiku poem. 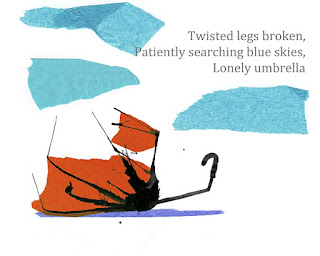 Haiku poems are 3 lines consisting of 5 syllables on the 1st line, 7 syllables on the 2nd line, and 5 syllables on the 3rd and final line.  We will write 5 haiku poems then choose our favorite to illustrate.  We'll also be learning a little more about Japanese culture and schools with examples from my travels and discuss our student exchange program with the Japan Society.  Below is an example of the traditional Japanese haiku illustrated. 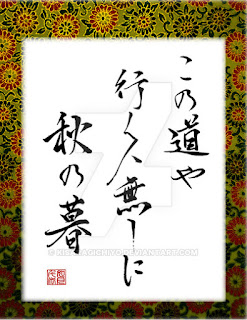 In the TED talk below Billy, who was a two-term U.S. Poet Laureate, explains the project and how his poems were animated for the Sundance Channel. 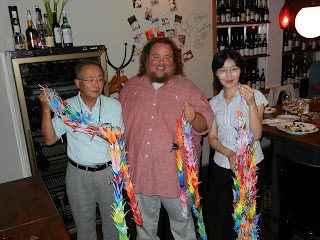 There will be no Art or Media Art Honor Society meeting today but we are still looking for volunteers to house the Japanese student visitors in March.  The application for the Japan Society program is now up for the summer as well.  We will be meeting next Thursday as scheduled! 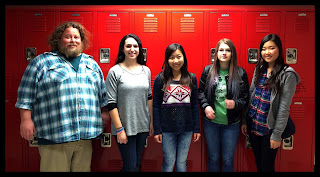 In Digital Media we are completing our video haiku poem's today, make sure the are exported (shared) as mpeg videos so that we can review them.  Remember all video and images must be your own.  Above is an example I did in class this week.
Posted by Needlesville, N.Y. at 12:00 AM No comments: 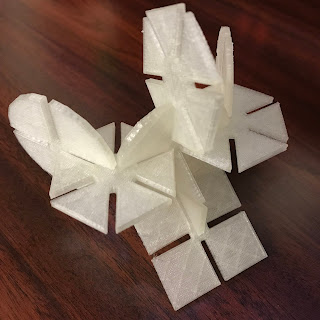 In Computer Art class we are beginning the 3D design unit with a 3D printing remix of Morphi's Modular Art Disks.  We are going to use the same sizing from the source files and create our own interchangeable disks.  We'll look at how that works in different programs including Morphi and Tinkercad then print the disks and build with them. later in the week.
Posted by Needlesville, N.Y. at 7:57 AM No comments:

This week we are working on re-designing a new flag for the town of Smithtown and we are going to take a note from Roman Mars, host of the 99% Invisible (one of my favorite design podcasts), and work to create a better flag for our town, Smithtown.  We are going to watch his TED talk and learn about vexillology, the study of flags, and then critique our town flag based on the basic design rules that he shares written below.

1. Keep it simple. (The flag should be so simple that a child can draw it from memory.)
2. Use meaningful symbolism.
3. Use two to three basic colors.
4. No lettering or seals. Never use writing of any kind.
5. Be distinctive


Our flag is definitely what we learned Vexillologists would call a "SOB" (a seal on a bedsheet) so we are going to help our town out by creating a new flag design that represents the 21st Century.  We are also going to use the Quiver app to create a virtual augmented reality video show off how great our new flag designs would look flying over the school and in town.  Be creative, be original- this project is due on Wednesday 3/29!

Here's a few of my favorite flag redesigns from last year for inspiration! 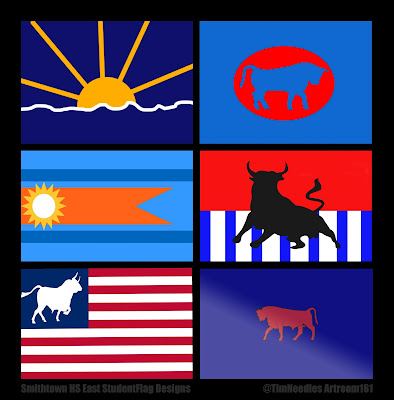 We will create 6 thumbnail drawings in color, then one full color design then take that design and bring it into Augmented Reality using a template.  The last step of the project is to record your flag design with augmented reality and share it, below is an example of the flag in Augmented Reality.

Today is Scholastic Art Awards Day! We have a number of different students in various classes who entered and did tremendous work.  Here's a link to the full winners list. Congratulations to AP student Chris Jarosak on winning a Silver Key in Digital Art for his piece Pulled Down and an Honorable Mention in Drawing and Illustration his piece Mountain. 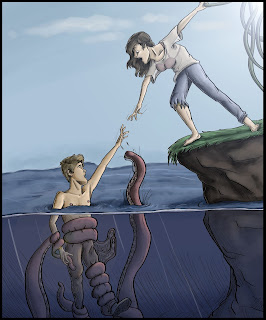