In film and animation creating storyboards is always one of the first and most vital steps in making a film work (and in saving time and money) and it's something that we will be doing as a class before each big project.  Storyboards are basically like comic books that show what will be filmed in order to plan filming and it allows directors and animators to work out decisions on the page rather than in the middle of filming which would be chaotic.  Here's a link to a terrific Vimeo film school lesson on storyboarding with some more information and examples to aid you in creating your first storyboard for this week's pixilation and below is an example from a student in class. 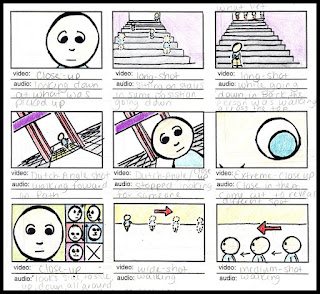