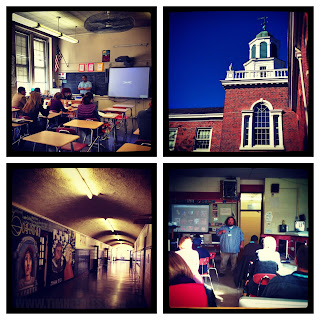 I attended my first Edscape conference yesterday which was put together by "the twitter principal" Eric Sheninger at New Milford High School in New Jersey and it was really a pleasure to be part of a conference that was focused specifically on innovation and creativity which incorporated so much classroom technology in meaningful ways.

The keynote speaker was Vicki Davis, the co-founder of Flat Classrooms, and I only managed to catch the end of her talk thanks to the nightmare that is the Cross-Bronx Expressway (even though I did leave at 6:20am) but luckily the talk was streamed on Ustream so I had a chance to see it thanks to technology.  I did attend a number of sessions which were both informative and intimate including a session on Digital Storytelling by a Teq, a classroom technology support provider that ironically is a few towns over in Huntington Station, which was really right up my alley as a media arts teacher.  I was also really impressed with Inanimate Alice which I learned about in Laura Fleming's session on Transmedia LearningWorlds, something I had never heard of previously but which relates directly to the classroom.  I also had a chance to participate in a fun and educational Mystery Skype with Bill Krakower (along with Jerry Blumgarten and Paul Nagle virtually).

I ended the day by presenting my own workshop on global education and technology along with Robert Fish from the Japan Society in NY and we spoke about the Going Global project that we've been working on with students from Japan, Pakistan, and the US along with a few other global resources such as Skype in the Classroom and some of my other favorite classroom technology tools. I've been to a good deal of professional development conferences in my years so my goal is to come away with at least one real thing that I can actually put to use in class in each workshop and happily this conference exceeded expectations.