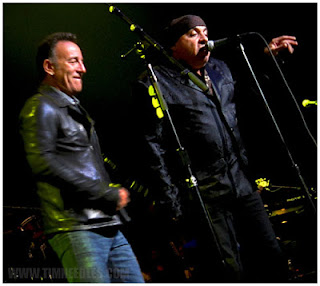 I had an opportunity to attend an awards presentation by the not-for-profit Little Kids Rock program which was started by former teacher David Wells 10 years ago to help restore the arts in public schools and I spoke with Steven Van Zandt of the E Street Band and The Soprano’s who was being awarded the “Big Man” award (named for his band mate Clarence Clemons who passed away last year) for his charitable work in music education.  Steven had a number of interesting things to say about art and music in schools but he made one point which really stuck with me:

"We're the only country in the world which thinks art is a luxury, it's not"

I certainly have seen this thought evident as I've traveled around the country and seen the cuts in arts education nationwide but I think something that can be learned from the unfortunate reality is for artists and educators to remind the public why the arts are important and to understand the impact they have on our culture and our economy. The event featured an array of guests who I spoke with including: Elvis Costello, American Idol winner Kris Allen, Robert Randolph, The Midtown Men (the original cast of The Jersey Boys) and I was also lucky enough to photograph surprise guest Bruce Springsteen and Southside Johnny who joined Steven onstage for a few songs so for the complete interview check out my article on Short & Sweet NYC.
Posted by Needlesville, N.Y. at 9:03 AM