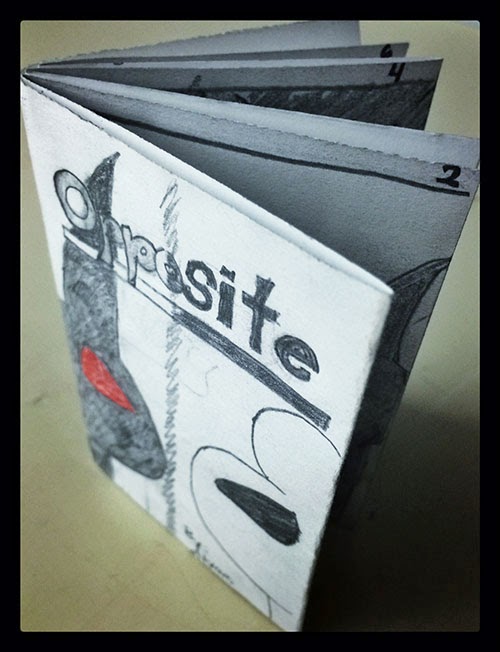 In Studio Art we are begining a new project on Comics and Graphic Novels and each of us will create a short 6 frame comic with a front and back cover in class this week.  Above is an axample from last year's studio art class by Alvaro showing the final comic and below is an image of how it's laid out using one piece of paper folded into 8 parts and cut in the center. 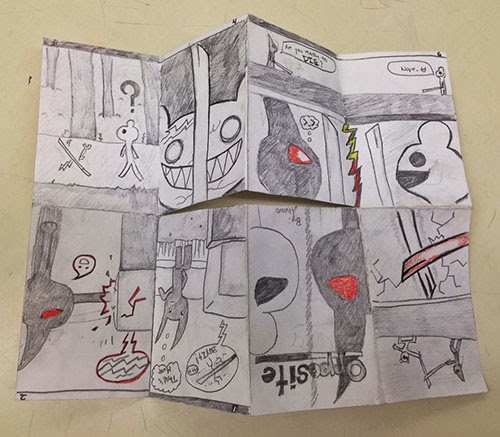 Before we begin working on our comic which will be due on Tuesday next week we are going to examine graphic novels as an art form and discuss storytelling.  We will look at successful writers such as: Neil Gaiman, Daniel Clowes, Craig Thompson, and Will Eisner and look at some of the most well respected graphic novels such as: Maus and Persepolis along with some of the fan favorites such as: The Walking Dead and Scott Pilgrim. 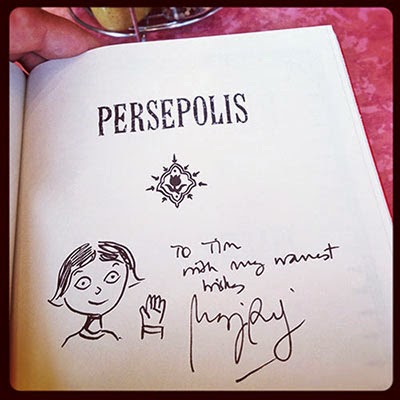 I had the chance to interview the author of well known graphic novels turned films Persepolis and Chicken With Plums Marjane Satrapi and below is an exerpt relating to her work being read in schools:


I work as a high school teacher in a pretty conservative area and your book is part of our curriculum. It’s kind of amazing. Look at how far things have come.
That makes me very happy. Truly, truly.


I was wondering what you would say to those kids, especially with the movie, there is the scene of the Americans that might make them question you?
Well, just consider that a human being in the world is a human being. The privilege of loving your family and being kids and wanting to eat ice cream and going to the movies is not only something you want. Everybody in the whole world, they want to have a peaceful life. We have some psycho people, you have them here too. They are everywhere, you know, they are like ultra-religious or whatever. You have a few of these guys, but unfortunately if they are crazy you hear them much more, than the other ones. From the second that we consider that the “other one” is a human being just like us and that it’s not an abstract notion, you know, “Middle Eastern, Muslim, Axis of Evil” then it will become very difficult to bomb these people. Just consider that the “other one” is just like you wanting to play, wanting to go to the movies, wanting to have, you know, the latest t-shirt that is very much in fashion, listen to the music, falling in love, if they consider that, then you know, this is the only thing that I can say, I don’t have any pretension that is more than that.

You can read the full interview along with an interview with her collaborator Vincent Paronnaud on Short & Sweet NYC.