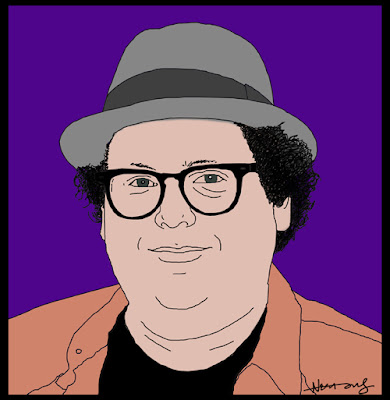 "My advice would be writing is everything"
As you may know in addition to teaching I also work as a journalist and occasionally have opportunities to interview actors, writers, directors, musicians, and artists for magazines and blogs. In each interview I try to ask a question that might aid my students and throughout this month I'll be sharing some of the advice I've heard from some of the people I've interviewed each Friday.

We'll start it off with actor and screenwriter Jonah Hill; I'm sure most of you are familiar with Jonah from his roles in films such as: Superbad, Knocked Up, Get Him to the Greek, Funny People, and Moneyball (for which he was recently nominated for a Oscar and Golden Globe for Best Supporting Actor) but in addition to acting he's also a prolific screenwriter. I had a chance to sit down with him at the Fox offices last year while he was promoting the independent film Cyrus from the Duplass brothers which also stars John C. Reilly and Marisa Tomei and I asked him about his advice:


Mr. Needles: I teach film and screenwriting in high school
and wanted to ask on behalf of my students what advice do you have for people who want to succeed in the business?
Jonah Hill: My advice would be writing is everything. You know being an actor and not being able to write is one of the scariest things in the entire world, I know this from friends of mine who are actors and don’t write because a lot of time as an actor, especially starting out you spend 99.9 to 100% of the time unemployed so if you can focus on writing everyday and getting better at writing- you should spend every day getting better at what you are trying to do. If you’re an actor and you want to act there’s not going to be movie parts for years unless you are one in a billion so find some friends who are into writing, write a play with them, and then you guys put it up where ever you can: in someone’s house or at a party or something or whatever, borrow a family members camera make a short film, read plays out loud with your friends… every day should just be spent moving forward at getting better at what you are trying to do. That’s my advice and that’s what I did, I just didn’t waste any day when I wasn’t writing or acting even in the few years of unemployment, you know, you just have to fill that time with things that are positive towards your goal.

Here's a link to more from the interview: Short and Sweet NYC
Posted by Needlesville, N.Y. at 8:17 AM