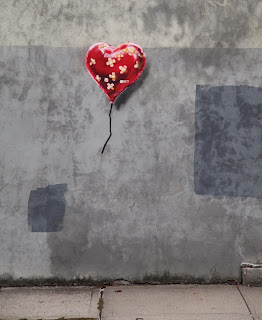 The infamous street artist Banksy is in New York City this moth doing a series of works entitled "Better Out Than In" along with a website and phone number to call which tells about each piece.  It's been a while since he's been in NY so it's been causing quite a stir with some street artists destroying his pieces and fans rushing to see the work before it's painted over or stolen.  The highligh so far is the Mobile Waterfall Truck shown in the video below which includes a rainbow, waterfall and butterflies and travels around NY.  Hopefully we'll get a chance to catch his work before its gone while on our fall field trip!